Current Operational Technology (OT) environments protected often include robotic endpoints. Robots have their own networks, technologies, safety requirements and business priorities, all of which must be addditionally uniquely addressed to secure robots effectively. Through a cooperation between Alias Robotics and Kaspersky, we launched a research effort to shed some light on the status of security for robot endpoints in OT environments. Our research showed evidence that simple attacks were feasible and that specialized security controls are necessary for capturing the complexity of modern robot interactions and preventing safety hazards. Read the complete case study here.

Robot cybersecurity reviews ([1], [2]) criticize the current status of cybersecurity in robotics and reckon the need of further investing in securing these technologies. Previous attempts to review the security of robots via offensive exercises or tools (including [3], [4], [5], [6], [7], [8]) which mostly focus on proof-of-concept attacks and penetration testing, detecting flaws in the Robot Operating System (ROS) [9]. A recent study [10] mentions the identification of several flaws within the ROS-Industrial codebase however it does not explicitly describe exploitable ROS-specific flaws. Considerations are made with regard to the open and insecure architecture predominant in ROS-Industrial deployments throughout its open source drivers. From interactions with the authors of [10:1] it was confirmed that the reported security issues were made generic on purpose, further highlighting the need for further investment on understanding the security landscape of ROS-Industrial setups. 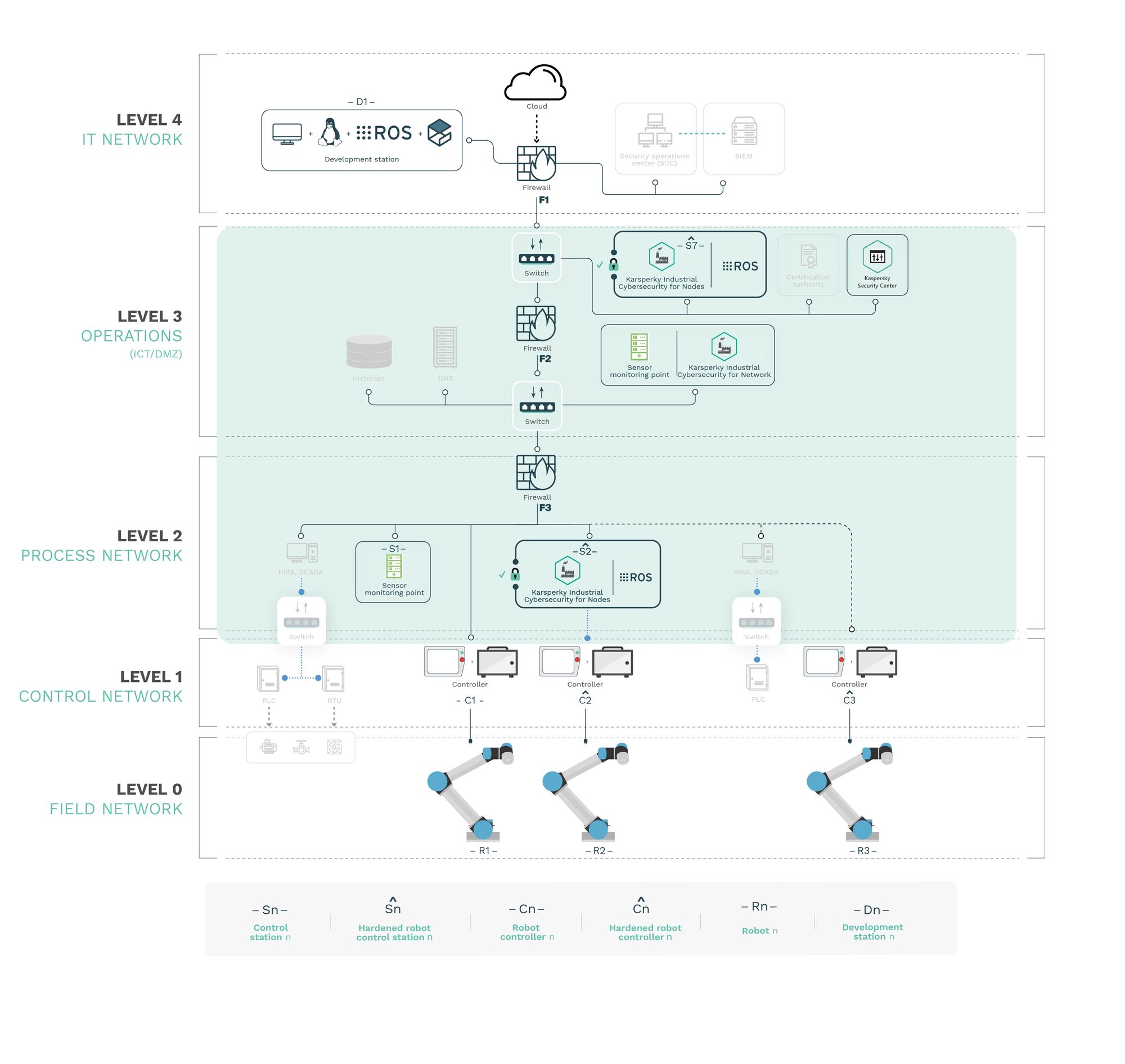 Use case architecture diagram of an OT environment when augmented with a professional cybersecurity solution. Depicts the current landscape of OT environments when augmented with a security specific solution, namely Kaspersky’s Kaspersky Industrial CyberSecurity (KICS). KICS is able to monitor and detect security threats at the network level efficiently, complying with the demands of many industrial automation processes. However the robot endpoints, if present, are often left aside. As discussed in [12], “the lack of security has safety repercussions” and both manufacturers as well as industry-owners will need to apply a security-first approach.

More recent research [11] showed that while ROS is rapidly becoming a standard in robotics (including its growing use in industry), the commonly held assumption that robots are to be deployed in closed and isolated networks does not hold any further and while developments in ROS 2 show promise, the slow adoption cycles in industry will push widespread ROS 2 industrial adoption years from now. Authors at [11:1] claim that ROS will prevail in the meantime and they wonder whether ROS be used securely for industrial use cases even though its origins did not consider it. [8:1] Analyzes this question experimentally by performing a targeted offensive security exercise in a synthetic industrial use case involving ROS-Industrial and ROS packages. The scenario is configured following common OT and ICS practices (including segmentation, segregation and an overall hardening). The authors of [11:2] select one of the most common industrial robots with ROS-Industrial support and configure an industrial environment applying security measures and recommendations. The exercise results in 4 groups of attacks which all manage to compromise the ROS computational graph and all except one take control of most robotic endpoints as desired.

In order to analyze the security of the robotic endpoints Alias Robotics has considered 3 different attack vectors. 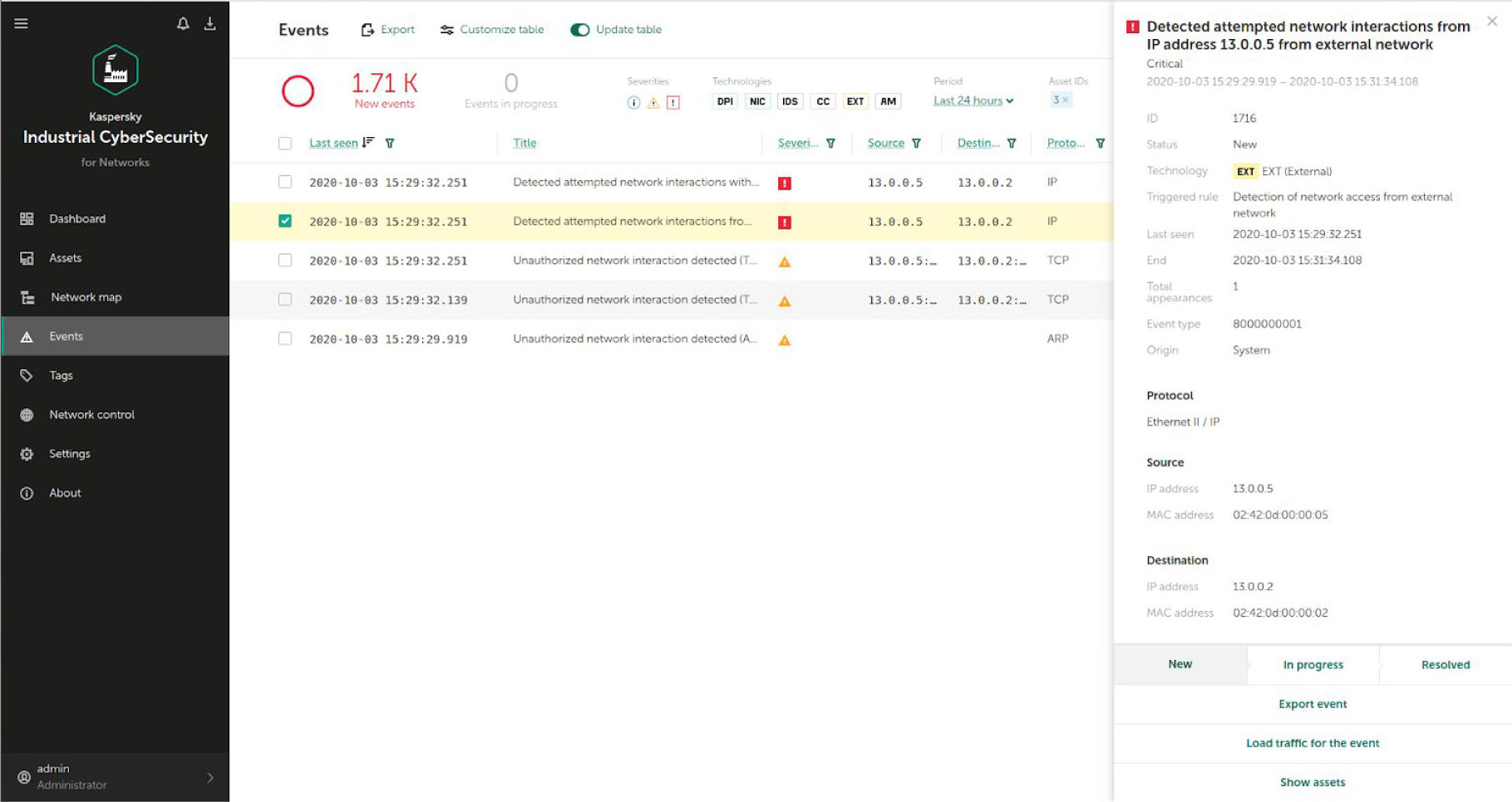 Detection of an incident as a result of an attacker leveraging RVD#1489 . KICS for Networks shows how after a previous training phase (“Learning” mode) and once it has entered its “Monitoring” mode, it successfully detects unexpected network attempts. The menu on the right allows to handle the status of the event and/or introspect the impacted assets or the network traffic involved. 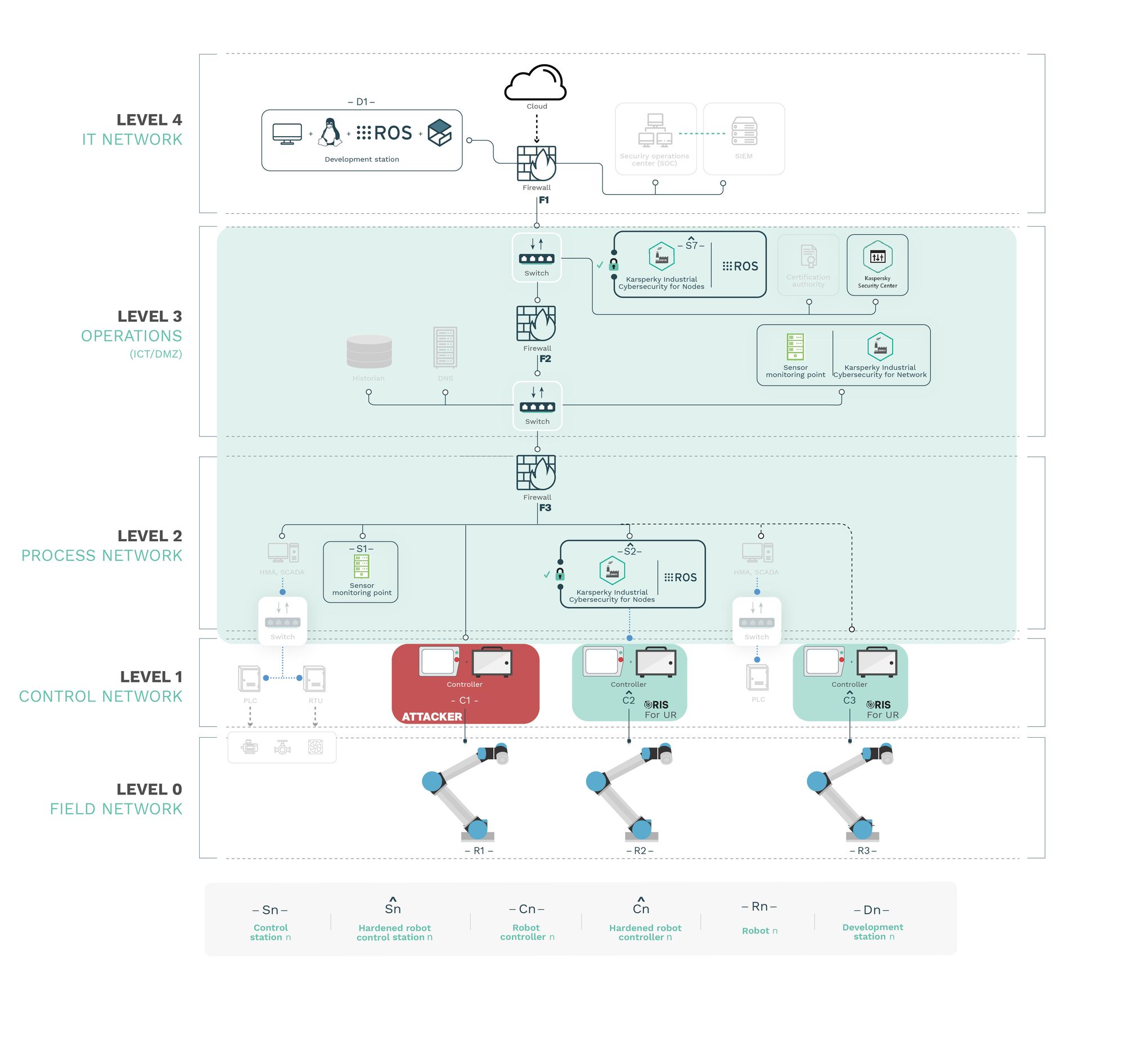 Entry point of an attacker acting as a controller insider and illustrating how KICS get no visibility. The attacker could gain access to the controller by either a) exploiting existing and known vulnerabilities in the controller directly or b) moving laterally using previously mentioned flaws affecting networking exposed services.

If you wish to learn more, read the complete case study here.

The results acquired through the research led Alias Robotics to conclude that the combination of the Robot Immune System (RIS, on each robot endpoint) together with the Kaspersky Industrial Cybersecurity (KICS) managed to jointly secure robot endpoints in OT environments.

KICS (and particularly KICS for Networks and Nodes) qualifies nicely as an industrial-grade solution to monitor environments with robotic endpoints; however beyond monitoring general industrial networks, additional security means must be used in combination with KICS to prevent robots from being compromised and cause safety hazards. Alias Robotics confirmed this with attacks targeting robot controllers and ROS networks. Alias Robotics also verified that the addition of RIS as a complementary solution successfully protects robot endpoints, mitigating the cybersecurity flaws of the selected robot endpoints and fulfilling the safety requirements.

From the research what is concluded is the following:

Release of the Robot Immune System (RIS) 2.2.2 to our customers, a security certified software solution for robots and robot components that protects them against cyberattacks. New security patches, bug fixes, modularity, security certification and more robots.

Alurity is a modular and composable toolbox for robot cybersecurity empowering security research in robotics.